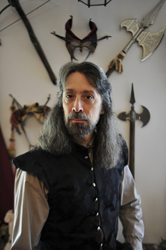 Will Hahn has been in love with heroic tales since age four, when his father read him the Lays of Ancient Rome and the Tales of King Arthur. He taught Ancient-Medieval History for years, but the line between this world and others has always been thin; the far reaches of fantasy, like the distant past, still bring him face to face with people like us, who have choices to make.

Will didn’t always make the right choices when he was young. Any stick or vaguely-sticklike object became a sword in his hands, to the great dismay of his five sisters. Everyone survived, in part by virtue of a rule forbidding him from handling umbrellas, ski poles, curtain rods and more.

Will has written about the Lands of Hope since his college days (which by now are also part of ancient history). With the publication of Judgement’s Tale Part One, Games of Chance, he begins at last to tell the tale of the Land’s most unique hero, The Man in Grey.

Will Hahn is the chronicler of the Lands of Hope tales:
The Ring and the Flag – try the Audio Book for free
Fencing Reputation
The Plane of Dreams – watch the trailer!
Three Minutes to Midnight
The Book of Tales

Find Will on Smashwords, on Amazon, or on Barnes &Nobles

Will’s Blog Thoughts – Including tales of a happy childhood (which continues), hopes for a writer’s journey, and analysis of Classics You’ve Never Read

Rafflecopter of the Lands Contest
Enter to win free Tales of Hope here!